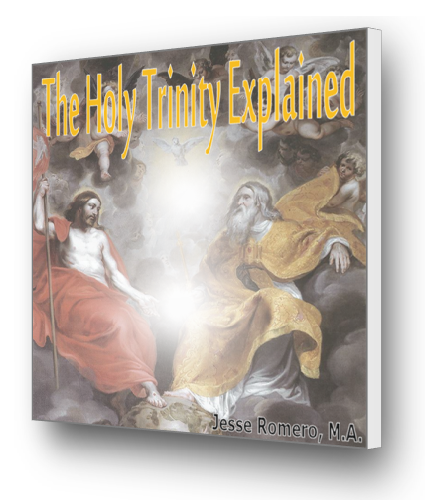 Aristotle the greek philosopher said that all good things come in three. Catholic-Christian revelation teaches us that there is one God - who is Father, Son, and Holy Spirit, co-equal, co-eternal, and co-majestic, One God in three persons.

There are religions like Islam and Judaism and cults like the Jehovah’s Witnesses and Mormons that deny that God is a Trinity of persons.

In this CD set, you will learn:

• Where the Holy Trinity is the basic doctrine of orthodox Christianity, that even though the word "Trinity" is not found anywhere in the Bible, the doctrine is certainly taught within its pages
• The doctrine of the Holy Trinity says that there is one God who exists eternally as three distinct Persons, the Father, the Son, and the Holy Spirit
• Why the first plank of the Trinitarian platform is that there is only one God
• Where the Old Testament shows that God says that even He does not know of any other gods!
• Why Jesus often spoke of God as His Father, and the apostles frequently spoke of "God the Father," but the New Testament also insists that Jesus is God
• Why the New Testament also makes the distinction between the Father and the Son as two very different Persons
• Where the Old Testament refers to the Holy Spirit as God at work in the world, without distinction from the Father
• Where Jesus explains that the Holy Spirit would be sent by the Father at Christ's request
• How the Holy Spirit would teach and guide the disciples, not speaking on His own initiative, but speaking on Christ's behalf and glorifying Christ
• Where the Holy Spirit is revealed by Christ to be a third Person distinct from the Father and distinct from the Son.