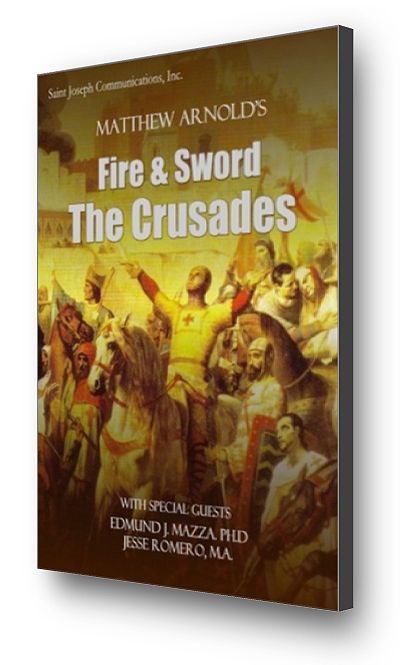 The story of the Christian Crusades to the Holy Land is one of the most fascinating events of medieval history – and raises many serious questions today. There is probably no institution in the history of man more unjustly maligned than the Catholic Church-and no more powerful rhetorical device than the distortion of the facts regarding the Crusades.

Opponents of the Church demand to know, "How can the Catholic Church be the true Church when she tortured and killed Jews, Muslims and even other Christians?" "How can a truly Christian Church be responsible for bloody religious wars, when Christ said, 'Turn the other cheek'?" "How can this Church, with the blood of millions on her hands dare to condemn 'a woman's right to choose'?"

Myths and Misconceptions
In the fascinating new DVD, Catholic convert and EWTN Radio personality Matthew Arnold pits the common accusations about these historical events against the findings of modern scholarship and what he uncovers will amaze you! In this informative presentation, he reveals that those who have a stake in keeping the myths and misconceptions alive are actively obscuring the best scholarship from both religious and secular historians.

Fire and Sword begins with an introduction to many virtually unknown facts about the Middle Ages, and exposes the common misconceptions about the period. Through the works of many leading medieval scholars, Arnold demonstrates that "If we judge the past by its fruits, we'll soon discover that the Middle Ages weren't so dark (and Catholics not so barbaric!) as so-called history suggests."

Holy War
In the presentation on the Crusades, you'll discover the true motives and methods of the Christian Crusaders and the nature of their struggle with Islam.  Following the example of the best current scholarship, modern medievalists go directly to primary sources for their research. They've discovered that Protestant and secular bias has rejected out-of-hand, the well-documented motives of the Crusaders in favor of a projection of their own anti-Catholicism.  Surprisingly, the supply of written records from the Middle Ages is both large and largely ignored. Even many Catholics will be surprised by what they contain!

Catholic Kryptonite?
You'll have your eyes opened to new perspectives and, perhaps most importantly, you'll more readily understand why certain forces (even within the Catholic Church herself) are so fervently dedicated to keeping the old myths alive.  Fire and Sword explodes the many myths surrounding these crucial episodes in Salvation History and will positively empower you to better defend the Church that Christ established.