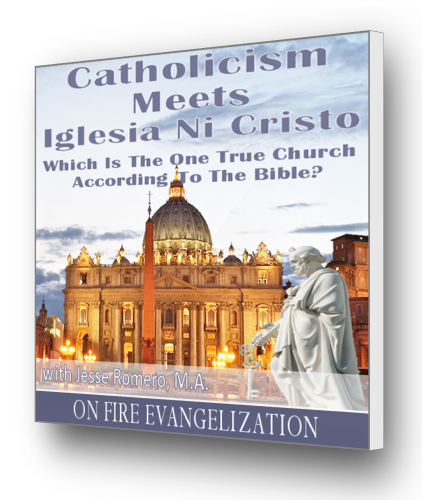 You've been asking for this debate in audio CD format for your car or CD player... We've heard you and the series is now available!

DEBATE: Which is the True Church started by Jesus Christ?

However, as John Henry Cardinal Newman said, "If ever there were a safe truth, it is this... And Protestantism has ever felt it so... To be deep in history is to cease to be a Protestant" and as Scripture instructs, "He who states his case first seems right, until the other comes and examines him." (Proverbs 18:17)

In these 3 CDs, Jesse Romero clearly and effectively outlines why Iglesia Ni Cristo does not stand the test of time and cannot be the Church that Jesus Christ founded.

Using copious amounts of sacred Scripture to prove his position in the debate, Jesse offers a verse-by-verse explanation of the Catholic Church's authority as given from Jesus to St. Peter.

After you hear this debate, you will thank God that you are a Catholic (a member of the True Church founded by Jesus Christ!)

In this 3-CD presentation, learn:

- Why the ‘New Evangelization’ requires that we learn the art of "explaining the Catholic faith intelligently, defending it charitably and sharing it effectively"
- Why the challenge to stand for the truth has never been greater
- How apologetics anchors us to the rock-solid truths of 2,000 years of Christianity
- Why the Christianity of history is not Protestantism
- Why the INC is just one of the many garden variety, anti-Catholic, fundamentalist denominations that cropped up in the 20th century.